My 1999 4.0 liter jeep Cherokee Sport had a very quiet ignition system when it rolled out of the factory. No pulse noise, no whines, or clicks, just nice and quiet.  At the 50,000 mile point, the dealer said it was time to replace the plugs, plug wires, distributor cap, and rotor. So, thinking nothing of it I said go ahead and drank another cup of their free coffee as they took care of it. A half hour later I rolled out and the nightmare began.  A couple miles down the road I snapped on the 220mhz rig and was greeted with horrendous ignition pulse noise on a local, full strap repeater!!!  Obviously thinking something was wrong, I turned around and went back to the dealer and told them that something they had done was fubar. They quickly rolled the vehicle in and went through everything.  Nothing was cracked, unseated, or incorrectly installed.  But the pulse noise continued.  Oddly, the AM broadcast band of the vehicle radio did not seem to be affected, but the FM broadcast band was.  Very odd indeed.  I grabbed the old wires, plugs, distributor cap, and rotor and took them home with me, figuring I could quickly get to the bottom of this.  Strange as it may seem, subbing the parts back out did not resolve it.  It was there and it was very prevalent on the VHF bands.  A shortwave radio 30 feet away was easily overcome with the same noise when the engine was running.  Before this incident, I could put the shortwave radio on the hood of the engine and it would not hear any engine noise.  All my body panel bonding straps were tight, the exhaust system was still grounded at several points, and my direct wiring to the battery connection block was still good to go.  All the normal methods of avoiding these problems were applied and unchanged from the quiet days prior to the "tune up".  Soooo... where to go from here???  I did some web research and found a company called Magnecor.  They make inductively wound ignition cables with a ferrite core to resolve stubborn problems with RF noise.


I went ahead and ordered a pre-cut set of the KV85 CN series wires for the Jeep 4.0 liter engine and waited for them to arrive.  Within a few days they were in my hands and I hastily ripped out the Jeep/Chrysler carbon resistor wires and installed the KV85 CN set.  They looked great! 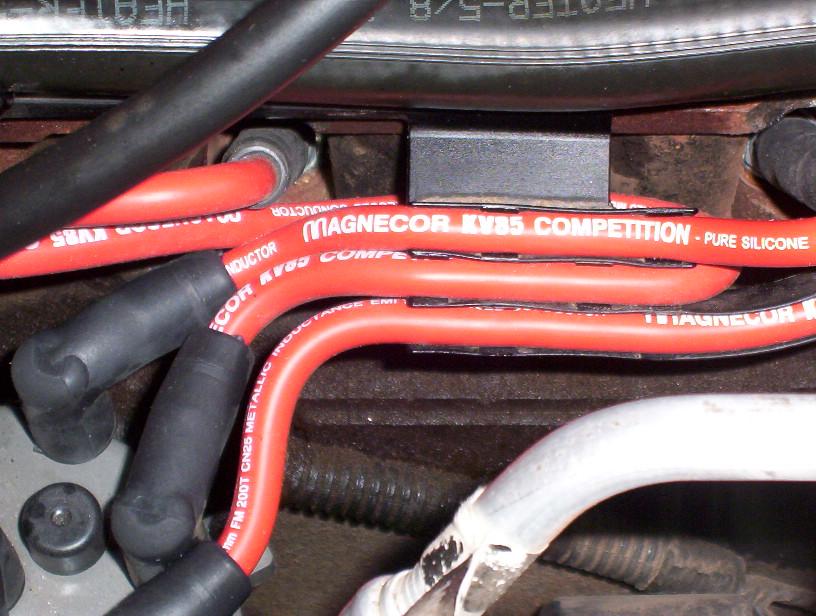 Although the wires are 1.5mm greater in diameter than the stock carbon wires, they easily fit into the wire guides on the engine block.  Unlike carbon resistance wires, these wires do not deteriorate over time, and have much less resistance than the stock wires, resulting in a hotter ignition system.  The engine starts on 1/2 turn in all weather, and runs great.  However, the nicest thing is that the engine is once again completely RF silent on all bands.  Problem solved!  I have no idea why the replacement wires and the old original wires were so noisy, but the new Magnecor wires are awesome.  It is one of those mysteries that shows up now and then, but I am glad I was able to resolve it.  The ignition wire kit cost about $65 and was worth every penny.